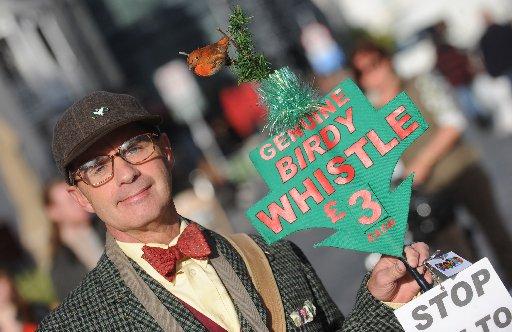 With traders around the county nervous about post Brexit sales the street seller known universally as ‘Annoying Bird Whistle Man’ is set to buck the trend with forecasts of record takings this Black Friday.

Interest has ramped up this year after the seller jumped on the Black Friday bandwagon reducing the price of his bird whistles from £3 to £2.75 prompting major interest from buyers in the Far East as well as locally. During the same period last year Annoying Bird Whistle Man sold a total of two bird whistles, one to a local child who sat down on the floor until his parents gave in and bought him one and the other to a pissed up northerner who was acting the maggot in front of his mates on a stag do. With this year’s pre orders and internet purchases Annoying Bird Whistle Man forecasts sales for the week to be as many as three bird whistles, nearly as many as he sold back in the halcyon days of 2002 before the recession hit trade.

Despite the bumper takings, fans of being crept up on and scared shitless or just generally being irritated need not worry as Annoying Bird Whistle Man has vowed to keep pounding the streets getting on shoppers tits right up until Christmas Eve.