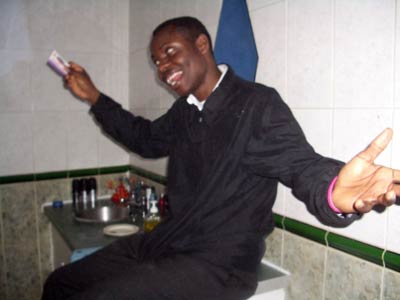 Brighton and Hove’s Freshen Up Men will hold a mass walkout on Saturday after union bosses failed to reach an agreement with employers over pay and working conditions.

Revellers out in Brighton on Saturday night will not be offered a splash, subsequently raising concerns over a lack of gash for the city’s single men. For the first time in ten years the 12 full time employed Freshen Up Men will not be lingering in the toilets as they hold a strike because of the pay dispute. The men will be picketing outside their respective clubs but will be refusing to offer sprays of perfume and will be resisting the temptation to chuck out a little rhyme. Punters will undoubtedly miss some of the classic phrases such as –

Bob Galloway from the National Union of Freshen Up Men (NUFM) released the following statement on behalf of the workers: ‘After weeks of talks we have reluctantly decided to take strike action. The pay offer on the table was derisory. The cost of fragrances is on the rise and the cost of Chubba Chubbs has gone through the roof as a result of the weak pound. The tips the lads get are also decreasing as more people look to negotiate the price of a spray. What people don’t realise is the hours these boys work and the amount of their own personnel time they spend learning the lines. I’m sure we will have the support of the public even if it means some people will have to go a Saturday without pulling some tart from Worthing.’

In an exclusive The Bulletin managed to catch up with one of the striking men. Taribo Song has been working the scene in and around Brighton for 6 years,’ I have been doing it a long time they need to start paying the dime. I sell spray and gum next to people wiping their bum, it is not a good job but it’s better than the rob. The boss needs to start paying the money or else the Brighton man gonna get no honey’ He complained.

Are you a striking freshen up man and want to tell your story? please get in touch with The Bulletin via our Facebook page.